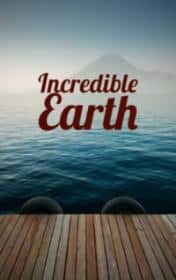 Earth is round, like an orange. Oranges have a skin and Earth has a skin, too. We call this skin Earth’s crust. Under the crust, there is very hot rock.

Earth’s crust has different pieces. These pieces move very, very slowly. Millions of years ago, the pieces moved and made mountains. Under mountains, the crust is thick, but under the ocean, it’s thinner. When two pieces of the crust move and meet, there can be earthquakes.

A volcano is a hole in Earth’s crust. When a volcano erupts, hot rock flies out from under the ground, and melted rock pours out over the ground. Volcanoes under the ocean sometimes make new islands. In 1963, a volcano in the Atlantic Ocean made a new island called Surtsey.

There are many different rocks in Earth’s crust. They are millions of years old. The rocks are often different colors. In the Painted Desert in Arizona in the USA, you can see the different rocks.

On Earth, there is more ocean than land. The Pacific Ocean is the biggest ocean. It’s bigger than Africa!

Did you know that there are mountains and valleys under the ocean? Some of these mountains are bigger than the biggest mountains on land. In the deepest parts of the ocean, the water is 10 kilometers deep.

The water in the ocean is always moving. Waves hit the land and break the rocks. Sometimes, big pieces of rock fall into the ocean. They leave big cliffs, like the beautiful Uluwatu Cliffs in Bali in Indonesia.

Where the ocean is warm, we sometimes find coral. Coral is made of millions of very small animals that make hard covers around themselves. When the animals die, the hard covers make the coral reef.

The Great Barrier Reef near Australia is the biggest coral reef in the world. It’s 2,600 kilometers long. Sea turtles, dolphins, and many other amazing animals live there.

In some places, where the coral reef is very big, it comes out of the water. It makes a small island.

Rivers usually begin as streams in mountains. The water comes from rain or snow. All rivers then go to the ocean.

One incredible waterfall is the Iguazu Falls between Argentina and Brazil. Iguazu means ‘big water’ in an old language of South America.

There’s more water in the River Amazon than in any other river in the world. It begins in the mountains in Peru and Ecuador. Then it goes through the rainforest in Brazil, and to the Atlantic Ocean.

There are no bridges on the Amazon. First, the river goes through rainforest and there are no roads. Then, near the ocean, the river is very wide so people can’t build bridges. They cross the river by boat.

The Amazon is the home of one of the longest snakes, called anacondas. Some grow to 9 meters long.

The coldest places on Earth are in the highest mountains, and at the North and South Poles. Here, there are rivers made of ice. They are called glaciers. Glaciers begin when snow falls.

Mountain glaciers move very, very slowly down the mountain. When the ice melts, the water goes into rivers. It can take thousands of years for the water from a glacier to get to the ocean.

At the North and South Poles, where the glaciers are near the ocean, very big pieces of ice break off. These are called icebergs. Icebergs move slowly on the ocean.

Near the North Pole, Ilulissat is one of the most incredible places on Earth – and one of the coldest. The glacier and icebergs here are very, very big. The glacier is about 40 kilometers long and it moves slowly to the Arctic Ocean. It moves about 30 meters every day.

Icebergs are dangerous for boats. Most of the ice is under the water, so people in boats can’t see all the ice.

Imagine you are in this park. Suddenly, you hear a loud noise of water moving very fast. Then hot water and steam pour out of the ground. You are looking at a geyser.

What makes a geyser? When it rains or snows, the water goes into the ground. Deep under the ground, there is hot rock. If rainwater touches a lot of hot rock, it begins to boil. Then there’s a lot of steam.

Suddenly, the water can’t stay under the ground. It has to come out. Geysers are very hot, so don’t go near them!

These white cliffs look like they are made of ice, but they are really made of rock. Hot water came out of the ground and poured down the mountain. Then minerals in the water made these incredible cliffs. They look like waterfalls, but they never move. They are thousands of years old.

At the Jigokudani Monkey Park in Japan, hot water from under the ground makes pools. When the weather is cold, monkeys sit in the warm water.

The biggest mountain chain in the world is the Himalayas in Asia. It began when two pieces of Earth’s crust met and moved up. They began to move about 50 million years ago – and they are moving now, very slowly.

The top of Mount Everest in the Himalayas is the highest place on Earth – it’s about 9 kilometers above the ocean. Everest is very big and it’s getting bigger. The top of Everest goes up about 5 millimeters every year, because Earth’s crust is moving all the time.

Near high mountains, there are often deep lakes. The deepest lake in the world is Lake Baikal in Russia. It’s more than 1,600 meters deep. Scientists are exploring the lake in small submarines.

Lake Baikal began when pieces of Earth’s crust moved and made a deep hole. Water from 330 rivers goes into Lake Baikal. There’s more water here than in all the Great Lakes in North America!

Caves are incredible underground worlds. Many people are interested in them.

What makes a cave? Near the coast, ocean waves hit cliffs and make holes. In the mountains, the moving ice in a glacier makes caves in the rock.

The most incredible caves are in soft rock called limestone. Rain falls on the limestone and makes holes. Slowly, the holes grow bigger and make caves. This takes thousands and thousands of years.

The Sarawak Chamber in Borneo is the biggest cave in the world. It’s longer than ten big planes!

Caves are usually very wet because water comes through the rock. Slowly, the raindrops mix with minerals and build incredible rock sculptures, called stalactites and stalagmites.

Thousands of years ago, people lived in caves. They didn’t have books or paper, so they drew pictures on the cave walls. People drew this picture in a cave in France, about 16,000 years ago.

Usually, Earth’s crust moves very slowly – only a few millimeters every year. Sometimes, two pieces of the crust move suddenly in different directions, and then there’s an earthquake.

Earthquakes are dangerous because buildings sometimes fall down. When there’s an earthquake, people in buildings go under a heavy table. Or they stand between two rooms. These are good ideas – they can help to keep people safe.

After a tsunami, there are often floods. There’s water everywhere. Houses, cars, and trees are in the water. The water isn’t clean, so many people are sick. In 2004, there was a very big tsunami in the Indian Ocean. Many people died.

A desert is a dry place, with almost no rain. About 20 percent (%) of the land on Earth is desert. What are deserts made of? Some deserts are made of sand, and many deserts are made of stones or rocks. Deserts are usually hot, but not always. Antarctica is a cold desert. It doesn’t rain often there, but there’s lots of ice.

The Sahara Desert in Africa is the biggest hot desert on Earth. It’s bigger than Australia! The animals in the desert can live there because they don’t drink very often.

Camels can live for a week with no water.

In Bolivia in South America, there’s a desert made of salt. It’s called the Salar de Uyuni. About 40,000 years ago, it was a saltwater lake, but now the ground is hard and dry most of the time. Sometimes the ground looks like a big mirror.

Many people visit the Salar de Uyuni because it’s an incredible place. There’s even a hotel made of salt!

Where are these rocks? Are they on the moon? No, they are in Cappadocia in Turkey.

They look like sculptures, but no one made them. Really, the windy weather made them. These rocks are not very hard. The wind blows on them and very slowly changes them. When the weather changes Earth in this way, we call it erosion.

In the Colorado River in the USA, erosion began about 20 million years ago. The river moved over the rock and slowly broke it. Sun, cold weather, and wind broke the rock, too. All these things made the incredible deep valley called the Grand Canyon.

Wind, rain, sun, and snow – the weather is a part of Earth’s story. Sun and wind make deserts. Glaciers move between mountains and make valleys. Rain falls on limestone and makes caves… This story began millions of years ago, and it is still going on. What an incredible story it is!